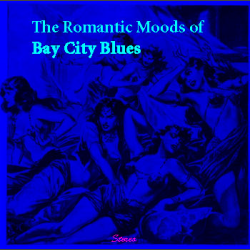 This double program CD, unite two different aspects of the band. First part originates from “Thirdo”, third original work of Bay City Blues, realized in 1997 by the trio Corey/Ford/Nirdlinger with Judy Asquith to voice in quite a lot tracks.

This work had a strange destiny: the group ends mixing of almost all the tracks but the cover was not realized and never of fact, the album went out. Root causes of this failure is the dissatisfaction of Corey for its vocal parts. The definitive edition, remixed and handled by the group, has a tracklist of only 12 songs that clearly show the evolution of the band. To the sounds of “Noise” a thick use of audio materiala is added (noisesi, vinyl disks, cd, samplings) in an original declination of the plunderphonia.
“B.C.B. Play Records”, compiled from live tapes recordings, extreme the aesthetics of plagiarism, set in montage from cinephile reminescence annulliing the song side of their sound. A work, this last, abreast of the published titles as Propane 100%.