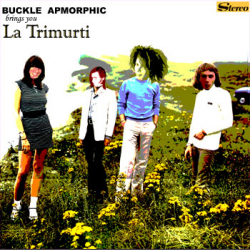 Originally published as triple album on cassette tape (three hours around of material), La Trimurti is the most ambitious project of the group. Except few tracks, based on classical rock form, is mainly based on free form, less of structures standard,and performed in a classical formation 2 guitars-bass-drums, ”La Trimurti“ is an experimental work to begin from the use of the instrumentation: percussions and objects of every type, toy piano and vibraphone toy, environmental noises.

The microphone recordings, based upon live performances by the trio Oxemberg/Reiville/Olsen are directly electronically manipulated in real time by Ewing.
Strange and lunar, with eccentric exoticisms, “La Trimurti” is a hard but rich work of inventiveness.
This CD version is an ideal abridged edition of the original work. The tracklist assemblage is directly cured by the band…