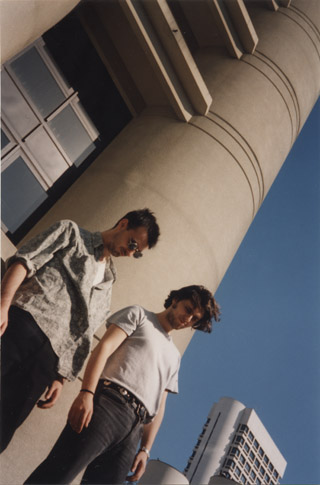 Jesper Olsen (voice) and J.R. Ewing (bass, sequencer, tapes) formed Trinitiy Loren in May 1993. Their sound, initially influenced by some eccentric realities of the rock - Doors, Suicide , Sisters Of Mercy in primis -, soon became harder, incorporating fascination from Metal Noise. Based on the passionate and poisonous vocal interpretations of Olsen, on the obsessive bass (often distorted) of Ewing, the repertoire of the band finds its true identity in their live exhibitions. All their rehearsal sessions were recorded and maniacally listed and they will form the material of their first two demotapes: "Trinity Loren E.P." and "Lord I Helped This Torture." In May '94 the duo recorded for the first time in studio the song"Wedge" for a German's gothic compilation (never released). In March 1995,helped by the sound engineer Aurelium Spitty, they recorded live at New Strawberry Studios, the material for the demo "Ze Mesmerized One" (as the other ones published by Bolgia Folk). The regular activity of the group stops at the end of 1996 but the artistic collaboration between Olsen and Ewing is still goin'on.